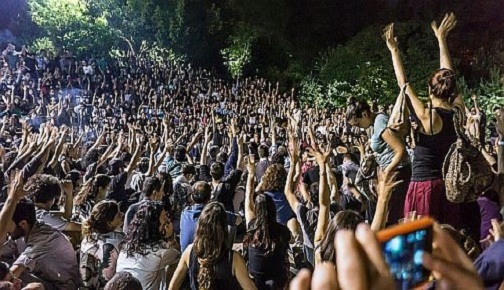 HOW SHOULD WE LIVE TOGETHER? PARLIAMENTS vs. COUNCILS

The revolution, which is a type of reaction that occurs during disintegration crisis of societies, is a claim to keep society together. Thus, is this integrative power still effective after the revolutions? Can they transfer their initial ambition to future generations? Hannah Arendt, as a political theorist, analysis the choice of parliamentary system as a way of governing and why Russian or French Revolutions failed, and it kills the revolutionary idea. She examines, in her piece, American and French Revolution as two crucial examples of functioning of modern parliamentary system. Besides, she offers another type of “living and policy making together”, councils which provide acting together, re-collection and remembering.

Almost all revolutionists, like Ayetullah Humeyni in Iran or Lenin in Soviet Russia with saying that “our aim is to achieve a socialist system of society, which, by eliminating the division of mankind into classes” (The State and Revolution, 1917), believe in the miracle of their aims, that they make plans and form historical answer to achieve. However, for Hannah Arendt, “the most radical revolutionary will become a conservative the day after the revolution” (The New Yorker, 12 September 1970), like after French Revolution. In other words, once the revolution has been achieved, i.e. after the overthrow of the old order and the existing party in power, the leader of the revolution will do everything they can to hang on to power, including disqualification to the former allies who are now seen as a threat, like Kaz?m Karabekir after establishing of the Republic, cleaning seats of anyone suspected of dissent, like Courts of Indipendence (?stiklâl Mahkemeleri), and so on.

To Hannah Arendt, the idea that revolution is a product of historical necessity is very problematic, which is not really welcomed by Orthodox Marxists, and she disputes the claim that it was driven by the “social question”. Rather, Arendt claims that a true revolution does not have any aim, for her, it is just about starting a new foundation among citizens who are individuals acting together, and try to find new answers to “how we would like to live together?” Besides, Hannah Arendt emphasizes on the uniqueness of every revolution which emerges from her belief unpredictability of action regarding an Aristotelian idea, phronesis, which is an action about giving the right decision at the right moment. For her, with every revolution, ‘new’ men begin to make politics and begin try to find new foundation of living together in order to establish a tangible public space of freedom.

She formulates this discussion with another discussion with respect to the theory of constitution by talking about constituted power that is in the state vs. constituting power that is outside of the state. After the revolution, constituting power that involves founding act must be present in the constitution that is a written document about rules of our republics. To Hannah Arendt, for lasting your revolutionary acting, you need institutionalizing the spirit of the revolution and being together with ‘councils’ that provide acting together, re-collection and remembering. Besides, it should be regarding acts of last revolution; spontaneous, just involve coming together and talking about anything about politics. For her, politics is about constituting public sphere of freedom which any one can exit from it, he or she can; instead, focus on his/her private live. And, no one is asking the question of “so what?” She tries to break this problem. For instance, any one especially involved in the forums, a kind of councils and new institutions which are, in some way, similar with what she is talking about, of Gezi Park?, even after several months, cannot image that just focusing on him or her private life after this revolutionary act. All uprisings end up with the similar idea, coming together; talking that all participants are equal. In this regard, also she talks about the parliamentary democracy in contrast to the council democracy which is composing with councils. She sees the councils as very contrast to the party structure, because of its hierarchy. Any type of governmental organization is against revolutionary spirit.

Arendt talks about one bad and one good revolution. The former is French revolution, and the other is American Revolution, however she sees both the French and American revolutions as ultimately failing to establish a political space where the activities of shared deliberation, decision and coordinated action could be exercised, in other words, they cannot institutionalize the spirit of their revolutions means act together. The dichotomy between the two, starts with the former one, being a struggle over scarcity and inequality (the “social questions”), while the latter questing to secure political freedom. In the case of the French Revolution, she talks about Jacobins that was coming power and whose government turned towards terror and tyranny; notwithstanding, in the sense of most of people like many liberals or Marxists the Jacobins were savers of the revolution.  Meanwhile, the American Revolution by means of the Constitution managed to found a political society on the basis of comments of its citizens and the Americans, living in a land of plenty and having a tradition of freedom, were trying to create “a unique state”, making their revolution more civic then the former. Yet she sees it only as a partial and limited success. The “revolutionary spirit” eventually died away because the founders were not enough to protect it when enshrining the Constitution. In other words, America failed to create an institutional space where citizens could participate in government, and could exercise in common those capacities of free expression, persuasion and judgment that defined political existence.

She is against not whole republicanist theory, but a particular understanding of republicans, Rousseau’s type of republicanism. She criticizes his idea that answers the question of “how can a society bring a unity”, of volonté general- General Will which was tried to formed after the French Revolution by Robespierre in the name of ‘virtue’ means effort of solidarization, in the sense that seeing the whole society as a one body in which everybody has different function, like arm- leg- mind analogy, and we should give sacrifices for total body, like martyrs do, it is very easily made, because they see the state as protector of the existence of this body. According to Arendt, “this effort was (in France) directed primarily toward the happiness of the many.” (p. 75) In other words, it kills different opinions in the society, like in France, after the French Revolution, they tried to form a unity whose core is the representative government and the parliament as the sake of the French ‘people’. For her, we can bring a union between different interests by forming and sharing an external enemy, like saying that “Jewish are bad guys” or “Arabs backstabbed us”, because the public as a whole can have just one particular interest which is needed for lasting republic, i.e. an enemy. It was happened in France and external enemy had been internalized.

I think, this part is particularly impressive, when she talks about that the ideal implementation of the democratic principle, which comes closest to the polis of antiquity, may be achieved in the American town hall meetings, in the elementary republics where “the voice of the whole people would be fairly, fully, and peaceably expressed, discussed, and decided by the common reason” (p. 253) of all citizens, one important and forgotten proposal. She, likewise, cites the example of the 1848 Paris Commune as an ideal type.

Like other artefactual designs, her suggestion has some problems. She suggests a will-o-the-wisp instead of the wrong reality. Forums of Gezi Park? or First Intifada can be seen as the best example of her willing. We do not know aftermath of Forums of Gezi Park? yet, although the First Intifada achieved great succession, it conduced toward the Second Intifada that is the terrible one.* In the First Intifada, Palestinians did not have any leader, because they all had been send to Tunisia by Israel, and people came together spontaneously and talked the present issue, they did not use guns, they did not have any particular ideology, except having common enemy -which is a point probably would be criticized by Arendt, they could not be organized before the actions, and because of all of these reasons, Israel could not find the way to reach or understand their actions.  Like Hannah Arendt suggests, they did not use guns, act together and meet spontaneously; however, one part of the uprisers, like Yasser Arafat, became preponderate and formed the future actions. Israelis killed lots of civillians in the shopping mall, on the street or at their homes, schools, and works, so on. Then the uprising became more and more political, not only in Palestine, in nearly all of countries. I know, she is not talking about “what it is”, she is talking about “what it should be”, however in this world with the people who are selfish and who aim to impose their view on the others, the ideal system of Arendt seems utopic to me.

I find her problematic in some parts of her work. Whereas Arendt makes statements like “the American Revolution… occurred in a country which knew nothing of the predicament of mass poverty and among a people who had a widespread experience of self-government“, she does not once mention about the systematic political disenfranchisement of women, people of color or slavery in the USA. Even if slaves weren’t seen as citizens, and making politics is seen as special to only citizens, I think it does not mean that we should just pretend not to see the problem and we should give up it to hands of system. For me, it does not mean we should take the consequence of the system. When letting people act on their own, they would like to think about his or her privileges on slavery, and because there cannot be any slave among them, they probably choose the ignorance. For her, democratic principles means coming together and talking without taking consequences into consideration; but, it probably does not bring us human rights, if we already live in the society that is composed of inequalities, like slavery, political disenfranchisement of women or people of color, and so on.

All in all, I think Hannah Arendt makes great arguments about “how we should live together” by proposing to constitute the councils or elementary republics rather than parliaments that are more appropriate governmental type for the most of people; however, she cannot see some problems even in her ideal American Revolution, like slavery or people of color, and in real life, her offers probably are beset with problems.

* For the history of First and Second Intifada: http://www.thejerusalemfund.org/ht/display/ContentDetails/i/2120