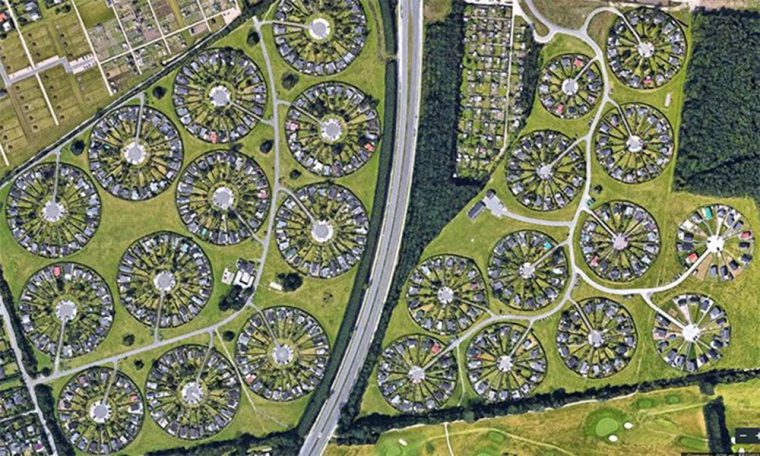 During the pandemic period, humankind faced many problems and this situation caused many phenomena in human life to be interrogated. Despite claims that began with the limits of fundamental growth in the 1970s, there is still thimbleful testimony that the human population and economic growth will outpace their capacity to grow food or purchase critical resources in the estimative future. There is no risk of people being deprived of sufficient farmland for food with the right management. The necessary resources for human welfare can be found when given abundant land and the required energy. In the meantime, climate change, ozone depletion, ocean pollution, air pollution, and water shortages continue. The most important justification for these problems is unplanned urbanization in the world. For the first time in human history, half of the global population resides in towns. 70% of the population is expected to live in towns by 2050. Towns cover only one to three percent of the world level and are home to about 4 billion people in the world.

Ecosystems are under threat around the world today. People will always depend on nature. In this framework, the current capitalist order results in a world in which more natural destruction and people’s living spaces are rapidly diminishing every day. Within this context, modernization is not brutal capitalism and laissez-faire model, but rather the long-term evolution towards greatly improved material welfare of social, economic, political, and technological regulation, public health, economic integration, resource productivity, shared infrastructure, and personal improvement. Separating human welfare from environmental influences requires a continued commitment to technological progress, and the ongoing evolution of social, economic, and political institutions is alongside these changes. Modernization processes are far from complete even in advanced economies. Today’s technologies offer very easy and attractive investment opportunities. With current technologies, people can get an education, produce and very effectively open up to world markets wherever they are.

It is necessary to develop investment policies in the fields of education, tourism, social facilities, and employment to return from the big towns to the rural areas all over the world. In this context, I would like to mention Bülent Ecevit’s Village-Town project. This project adopts both the urban lifestyle and the peasant production model. This Project focused on facilities and infrastructure services concentrated in the most convenient centers among the village groups for increasing productivity in agriculture, the villagers’ ability to benefit more from social services, and the development of an agricultural-based industrialization movement. These centers would enable the dispersed villages to gather spontaneously in time and the regularity of the urbanization movement. At the same time, the flow of overpopulation to big towns would automatically slow down and interregional justice would be realized in urbanization and distribution of industry (Can Osman Aksoy Youtube Channel, 2020).

Since these centers, called Village-town, would be connected to the surrounding villages by roads, the villagers would benefit from the services in these centers easily. The peasant cooperatives in the surrounding would dominate the economic and social life of the village towns. Agricultural machinery workshops, health and education institutions, vocational courses, all kinds of culture, sports and entertainment facilities would be concentrated in village-towns. Thus, the peasant would be able to create their own cities. Hidden unemployed members of families whose land is insufficient to support themselves and agricultural workers who might be unemployed due to the improvement in agricultural technology priority would be given for work in the small industry established in their region.

Former Prime Minister Bulent Ecevit participated in the election with this project and increased the party voting rate to %41.4 in 1977 local elections. This rate of votes went down in history as the highest rate of votes won by a left-wing party in multi-party political life. He became prime minister by establishing a new government in 1978. However, a year later the government was overthrown and the project was shelved. When we came to 1999, he came out as the first party in the elections and became prime minister again as a result of his coalition. During this period, he carried out this project in Mesudiye village of Ordu, a small settlement on the Black Sea coast. As part of the project, 9 villages united and migration from the city to the village started. The population of the village has increased by 30% in 2 years. The slogan of the project was quite striking: it is not the villages that will unite, but the power of the peasants!

The World Bank has allocated a loan of 300 million dollars for the project. With this loan, it was aimed to put the project into practice in 3000 villages (Hürriyet, 2002). However, due to the fall of the government after the 2001 economic crisis, the project could not be realized and this loan could not be used (Hürriyet, 2003). In the general elections, AK Party and Recep

Tayyip Erdogan came to power alone. That was the last days of Bülent Ecevit. He stayed in the hospital and he was very old. His last request from Prime Minister Recep Tayyip Erdogan, who came to visit him, was to continue this project. However, AK Parti government shelved this project (Çağlayan, 2016).

The project is not implemented in Turkey. However, a miniature of the project is available in the USA. Futurist Jacque Fresco, who lived in Istanbul for a while, was inspired by this project of Ecevit and implemented a project called “Venus Project”. He focused on the transition to a resource-based economy, renewable cities, energy efficiency, and natural resource management. This organization was started in 1995 by Jacque Fresco and Roxanne Meadows (Corporation Wiki, 2016). Venus, which is the name for the Venus Project, is a research center in Florida with an area of 85,000 m2 near Okeechobee Lake (Autity31 Youtube Channel, 2009). The Venus Project was established with the idea that the cause of poverty, famine, all kinds of corruption in society, crime, and wars is a profit-based economic system. Jacque Fresco theorized that when we get rid of the profit-based economic system, it will provide more resource abundance and therefore more products for more people and eliminate famine, poverty, and hunger. (Meta Magazine, 2009).

The pandemic process has once again shown us that the unplanned urbanization we live in cannot be sustained any longer. Towns have filled their capacity. A sustainable lifestyle will be needed after the pandemic, but how? Humankind’s need for projects such as Ecevit’s Village- Town project and Fresco’s Venus project continues to increase day by day. These projects can be updated and implemented. Who can guarantee that the world will not encounter a new, more virulent virus after the pandemic? If there were villages-towns all over the world, would we need to be afraid of the epidemic? A virus emerging in Wuhan with a population of 10 million spread to the world in a short time. Can you imagine that this virus originated in Tokyo with a population of 37 million, or Delhi with a population of 31 million, or Shanghai with 27 million? How can you quarantine these cities? This is not possible. But you can quarantine village-towns with a population of 30-40 thousand easily.

Another reason to review the urbanization style is natural disasters, especially earthquakes. A significant rate of those who lost their lives as a result of these natural events lives in towns. These losses can be minimized in village-town projects where horizontal architecture prevails. Besides, resources should be used efficiently in the global climate change process. Post-pandemic settlement models should be designed with the claim of zero waste. It’s much easier to do something from scratch than to change an existing one. And nowadays there are many opportunities for this. For example, in today’s world, there are nearly 300 million asylum seekers and refugees. A significant rate of these people live in refugee camps and their contribution to production is out of the question. They struggle for life in very difficult conditions. Many international organizations, especially the European Union, fund many projects related to refugees. However, it is a big question mark to what extent these projects are permanent and produce solutions to problems. I think the village-town project can be tested at a refugee camp in Greece or Lebanon. Why not?