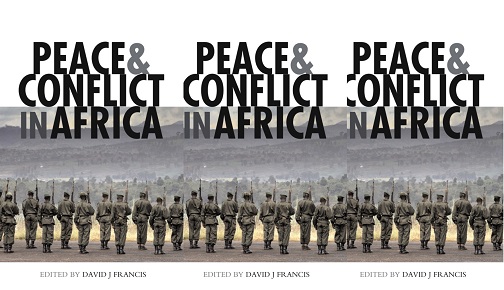 Edited by David J. Francis, the book “Peace and Conflict in Africa”, looks at the concept of peace and processes involved in achieving it in the context of Africa from a perspective that is less popular in the literature. In order to understand the concepts of peace and conflict in Africa, the authors of the various chapters took a closer look at the dynamics within the region from a regional and internal perspectives rather than seeing it as the west or the rest of the world would.

The book consisting of 12 chapters has been organized by the editor into two sections which are “understanding concepts and debates” and “issues in peace and conflict in Africa”. Francis starts the opening chapter by analyzing the misconceptions about Africa in the international arena. Generally, Africa is seen in two realms; either the dangerous and mysterious part of the world plagued by wars, economic problems, political instability, diseases, etc. or the part of the world with a multitude of wildlife reserve, safari, rich natural environments. Hence, from the outside world, Africa continues to seem as the “hopeless continent” or a place with little to no development. This portrayal leads to a homogenization of the continent in the minds of many people, a factor that the book tries to debunk. African countries while having some similarities such as high dependency on foreign aid, also possess several differences and hence the need for “dehomogenization”. One peculiar thing about the book that makes it different from many others on the issue peace in Africa is how it tries to analyze the current situation of African countries within the context of today and based on their current developments. For Francis, Africa in the 21st century is significantly different from Africa in the 20th century; it is characterized by continuity and change today.

The book looks at conflict, peace and other related concepts from an African perspective rather than a western one. As argued in the book, conflict in Africa should not be seen as caused by one absolute or ultimate factor but by a congregation of history, sociocultural dynamics, domestic politics as well as factors from the international arena. The book challenges the tradition of using western established peace processes in trying to alleviate conflicts and wars in Africa. Instead, the authors take a look at indigenous African societies and their traditional ways of dealing with conflict. Tiv in Nigeria, Guurti system in Somaliland, Nad Mato Oput in Uganda, and Ubuntu in South Africa are examples of indigenous peace processes in parts of Africa. Additionally, the book also looks at peacekeeping from a regional perspective by understanding the roles that regional organizations such the African Union (AU) and the Economic Community of West African States (ECOWAS) could play in the process. In a nutshell, the first part of the book conceptualizes peacekeeping from a local and regional perspective.

The latter part of the book delves into a more practical aspect of peacekeeping processes and development in the context of African politics. It examines the controversial and problematic issues that serve as the biggest challenges and hinderances in administering peace process. Among the dominant reasons being patrimonialism, which is a system in which the resources are used for the private interests of the leader or a group of elites rather than towards achieving the set target. Interestingly, the book also challenges some already established “interpretations of peace and conflict in Africa” in the literature. Interpretations such as “greed and grievance” and “resource curse” are put into question to understand how well they explain the situation in many African countries. The book comes up with an alternative explanation that prospects of peace in Africa is threatened by an amalgamation of several causative critical factors such as “poverty, underdevelopment, development goals and targets, HIV”, national debts, political instability etc.

Indeed, there is no book without flaws. However, the book peace and conflict in Africa proves to be an exceptional one in its field in the sense that it presents a perspective of Africa that is little known. It goes against the convention of forcing western democracy, peace processes and development goals down the throat of non-western countries. In lieu, the authors discuss the role of Africa’s own indigenous practices, local governments and its regional organizations in peace processes within the region, but also not forgetting to highlight the several challenges slowing down the process. If one seeks to understand the current peace and development processes in Africa from a more local perspective, then this book definitely a good place to start.