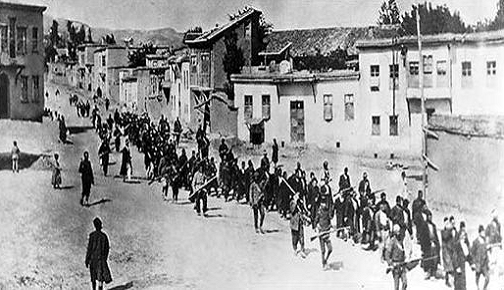 WAS IT A GENOCIDE OR NOT? – POSITIONS OF THE COUNTRIES ON THE ARMENIAN ISSUE DURING THE OTTOMAN EMPIRE

On the 22nd of February, the members of the Dutch parliament voted in favor of a motion recognizing the “Armenian genocide”. Only three out of 150 lawmakers were opposed to it – all three belong to the “DENK”, a popular party among the Turkish and Moroccan immigrant communities, founded by two people with Turkish roots. However, since the government of the Netherlands does not want to worsen relations with Turkey, the Dutch foreign minister already said that her cabinet is not going to follow the parliament’s opinion[1].

As it usually does when some country recognizes the “Armenian genocide”, the Turkish government summoned the Dutch charge d‘affaires to Ankara (due to diplomatic problems, the Netherlands does not have an ambassador in Turkey since the beginning of February), strongly condemned the decision and, this time, the Ministry of Foreign Affairs went further and, in order to devalue the motion, even mentioned the 1995 Srebrenica massacres, in which Dutch troops were deemed responsible for the death of thousands of Bosnians[2].

The United Nations Convention on the Prevention and Punishment of the Crime of Genocide defines genocide as; “acts committed with intent to destroy, in whole or in part, a national, ethnical, racial or religious group”, including: “killing members of the group; causing serious bodily or mental harm to members of the group; deliberately inflicting on the group conditions of life calculated to bring about its physical destruction in whole or in part; imposing measures intended to prevent births within the group; forcibly transferring children of the group to another group”[3].

As before seen, the whole controversy about whether what happened to the Armenian people under the Young Turk government of the Ottoman Empire during the World War I (1914-1918) was a genocide or not is still extremely alive – and it is a very sensitive topic. On the one hand, the Armenian government and, in fact, some scholars view it as a genocide in which approximately 1.5 million people died[4] (for instance, the International Association of Genocide Scholars states that the “documentation on the Armenian Genocide is abundant and overwhelming” and considers that scholars who deny it are simply ignoring the scholarly evidence available[5]). On the other hand, the Turkish government and scholars denies that a genocide took place – a position with which 91% of Turks agree[6] –calling the Armenian claims, especially the estimated 1.5 million casualties, a “baseless and groundless” number[7]. Furthermore, Turkey, even though it assumes the deportation of Armenian people (provoking the death of hundreds of thousands of them), argues that there was no official intent by the government to exterminate the Armenian nation. Instead, the argument goes, not only Armenian Christians but also Turkish Muslims died in intercommunal violence originated by the First World War[8] – one must not forget that some Armenians living in the Ottoman Empire organized volunteer battalions to help the Russian Army fight against the Ottomans[9].

The acceptance of the “Armenian genocide” is not a mandatory condition for Turkey to enter the European Union. However, the European Parliament (EP) has already recognized it, adding that only if Turkey does the same it would be possible to “pave the way for a genuine reconciliation between the Turkish and Armenian peoples”[10].

Almost thirty countries worldwide took the same stance as the EP, more than a dozen of which are European Union countries – including Germany, France, and Italy.

The Germans were the last of those three countries to recognize the “Armenian genocide”: they did it in 2016, provoking a huge outcry in Turkey. The resolution approved by the Bundestag, the German parliament, says that “Germany’s own experience shows how difficult it is for a country to work through a dark chapter of its own past”, but it is written that “an honest evaluation of history is the best tool for reconciliation both within a country and with others”[11]. By making this decision, Germany has also acknowledged its own role (and responsibility) as, during the World War I, the Germany Empire was an ally of the Ottomans and, according to the motion emanated from the Bundestag, it did nothing to stop what was going on.

In the case of the French parliament, after the official recognition of the “Armenian genocide” in 2001, it has already tried twice to adopt a law banning denial of it. Both in 2012 and in 2017, those attempts were blocked by the Constitutional Council, which considered them “unnecessary and disproportionate” since they would undermine the freedom of speech[12]. This decision by the highest constitutional authority in France was also justified as a way to stop a law that would bring uncertainty over the legality of some actions/discussions related to a historically debatable subject.

The same didn’t happen in Italy. Besides the fact the country passed a law, in 2000, labeling the Armenian experience as genocide, it has also approved a bill criminalizing the denial of genocide and crimes against humanity. However, it only aims to punish someone’s ideas when “there is a real danger of their [negationist ideology] dissemination”[13].

On the contrary, the United Kingdom has preferred to talk about (and to condemn) a “terrible suffering that was inflicted on Armenians living in the Ottoman Empire” and thinks that is up to an international legal body to find whether a crime has been genocide or not: if one day that happens, the UK is open to change its position[14]. In other words, although the British government points out that “a few historians disagree on the scale of the deaths [an estimated 1 to 1.5 million ethnic Armenian people]”, it is considered that this is a legal question rather than a political one. Actually, a leaked Foreign Office document from 1999 said that given “the importance of our relations (political, strategic and commercial) with Turkey”, UK’s position “is the only feasible option”[15]. In 2015, David Cameron, who was then the English prime minister, rejected an invitation to join the memorial events commemorating the centennial of the “Armenian genocide” in Yerevan.

Vladimir Putin, in contrast, decided to go to the Armenian capital where he claimed that “more than 1.5 million peaceful [Armenian] people were killed and injured, and more than 600,000 were driven from their homes and suffered mass repression”[16]. The Russian president also used the word “genocide” in his speech and Recep Tayyip Erdoğan’s answer was not long in coming: the Turkish president boldly criticized it and said that Putin should first explain what Russia has been doing in Ukraine and Crimea[17]. The Russian parliament (Duma) recognizes the “Armenian genocide” since 1995. In the resolution, the attention is drawn to the fact that “the physical extermination of the fraternal Armenian people in its historic homeland aimed at destroying Russia”[18].

In which concerns this topic, Israel and the U.S., although they are under pressure from their public opinion, have not recognized the “Armenian genocide”. In fact, in Israel, the Knesset (parliament) Committee on Education, Culture and Sport did it, in 2016. On the occasion, its chairman said: “It is our moral obligation to recognize the Holocaust of the Armenian nation”[19]. Yet the whole parliament has rejected to do the same some weeks ago. Tzipi Hotovely, Israel’s deputy foreign minister, refused to take an official position on the subject “in light of its complexity and diplomatic repercussions, and because it has a clear political connection”[20].  In 2007, after a request from the then Israeli Prime Minister Ehud Olmert the Knesset opted not to discuss the matter for the repercussions it could have for the diplomatic relations with Turkey – and this is just an example since similar requests have been made frequently. To some analysts, not to threaten the political and military relationship with Turkey is not the only reason behind that refusal. The other one is the strong economic relationship with Azerbaijan (Israel imports 40% of its oil from that country and exports to it a huge amount of weapons and defense systems), which has tense relations with Armenia (especially because of the disputed territory of Nagorno-Karabakh)[21].

As for the U.S., 48 out of the 50 states have already issued a proclamation calling the Armenian tragedy a “genocide”, but the American Congress has preferred not to do so yet. Last month, Ben Rhodes and Samantha Power, two key foreign policy advisers to Obama, apologized for the fact that their administration had not recognized the “Armenian genocide”, especially after Obama had promised it during the 2008 presidential campaign. Rhodes said that “every year there was a reason not to”, adding that “Turkey was vital to some issue that we were dealing with, or there was some dialogue between Turkey and the Armenian government about the past”[22]. Trump’s arrival to the White House does not seem to represent a shift in the U.S. approach to this topic. In his statement on Armenian Remembrance Day 2017, he used the expression “Meds Yeghern”[23], which means “great calamity” in Armenian, using a very similar language to that of Obama and other former U.S. presidents. It is worth remembering that both in 2007 and 2010 the American House of Representatives’ foreign affairs committee voted in favor of a resolution recommending the U.S. to recognize the “Armenian genocide”, prompting an angry reaction from the Turkish government. However, the measures did not get a full vote in the House of Representatives, which means they were never adopted by the Congress.

As one can easily understand, taking into account the subject of this article, the international community does not speak with one voice, especially due to its sensitiveness: both because of historical reasons and because some countries believe that a change in their official stance (if they recognize the “Armenian genocide”) can jeopardize their diplomatic relation with Turkey. Yet, as the New York Times writes, “despite initial protests, Turkey has maintained good relations with several of” the countries that did it[24]. Be that as it may, in the case with which this article started the Dutch parliament’s position will certainly not help to soothe the strained relations between the Netherlands and the Turkish government.

[2] Republic of Turkey Ministry of Foreign Affairs – “No: 53, 22 February 2018, Press Release Regarding the Decisions of the House of Representatives of the Kingdom of the Netherlands on the Events of 1915”. 02/22/2018. http://www.mfa.gov.tr/no_-53_-hollanda-temsilciler-meclisinin-1915-olaylari-konusunda-aldigi-karar-hk_en.en.mfa

[3] The Office of the United Nations High Commissioner for Human Rights – “Convention on the Prevention and Punishment of the Crime of Genocide”. 12/09/1948. http://www.ohchr.org/EN/ProfessionalInterest/Pages/CrimeOfGenocide.aspx

[4] The Office of the United Nations High Commissioner for Human Rights – “Why Scholars Say Armenian Genocide Was Genocide But Obama Won’t”. 04/24/2015. http://www.newsweek.com/why-scholars-say-armenian-genocide-was-genocide-obama-wont-325262

[9] The Guardian – “Grim history of Armenians in Turkey that led to accusations of genocide”. 03/05/2010. https://www.theguardian.com/world/2010/mar/05/history-armenia-turkey-genocide