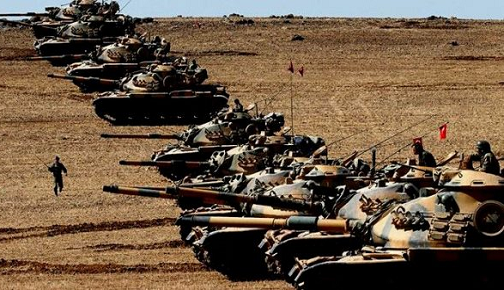 The Turkish operation in Afrin (Syria), which started on the 20th of January, has been provoking several reactions from the most powerful countries on the global stage. Aimed at protecting Turkey’s national security against what it considers to be serious threats on its border with Syria, the main target is to “eliminate” what Turkey calls the “terrorists of PKK/KCK/PYD-YPG and Daesh”[1]. In Ankara’s opinion, the “Operation Olive Branch” is also necessary in order to protect the civilians living in the region, which is ruled by the Kurdish Democratic Union Party (PYD) and its military arm, the People’s Protection Units (YPG). The YPG are the leaders of the Syrian Democratic Forces (SDF), the American spearhead in the fight against Daesh in Syria. However, in Turkey’s perspective, the PYD/YPG and the Kurdistan Workers’ Party (PKK, a terrorist group to both the U.S. and Turkey) are the same (terrorist) organization.

The Syrian President, Bashar al-Assad, and his government have already condemned the “brutal Turkish aggression”, accusing Turkey not only of violating the country’s sovereignty but also of supporting terrorist organizations since the beginning of the conflict in Syria[2].

The same opinion has been echoed by Iran, a staunch ally of al-Assad, which asks Turkey to stop its campaign. “Turkey’s actions can bring back insecurity, instability and terrorism to Syria”, by boosting terrorist groups in the north of the country[3]. Moreover, besides calls for the respect of Syrian territorial integrity, the Iranian government made clear that the solutions for the war should be discussed in Astana, Kazakhstan, where the peace (and reconstruction) talks on the Syrian conflict have been held.

Not surprisingly, Russia – the other Assad’s greatest support, and, along with Iran and Turkey, the mediator of the Astana peace process – has expressed the same concerns over the subject. Urging the opposing sides to exercise restraint, the Russian Ministry of Foreign Affairs said that its priority is “to ensure the ceasefire in the de-escalation zones”[4].  Right before the beginning of the Afrin operation, “to prevent potential provocations, to exclude threats to the life and health of Russian servicemen”, the country withdrew its soldiers from that territory[5]. In that occasion, the U.S. was also blamed for their “irresponsible actions” – which can now compromise the Kurds position in the peace talks, where Russia thinks they have the right to be – when they announced the creation of border forces near Turkey.

As for the Americans, the old Kurdish saying “the Kurds have no friends but the mountains” is being commonly repeated by some Western media and some Kurdish on the ground, since the U.S. position is straightforward: The American support goes only to YPG’s operations against Daesh, not against Turkey, “a key NATO ally”[6]. Nevertheless, U.S. President Donald Trump “urged Turkey to deescalate, limit its military actions, and avoid civilian casualties and increases to displaced persons and refugees”, pointing out that the focus should be on defeating Daesh[7]. It’s worth remembering that USA’s support for Kurdish YPG fighters in Syria has strongly contributed to a deterioration of diplomatic relations between the Americans and Turkey. The situation got even worse when the U.S.-led coalition announced the creation of a “border guard force” of 30000 personnel, composed of SDF fighters, across the Syrian borders with Turkey and Iran. As a result, it is hardly surprising that recent surveys show that anti-U.S. views are quickly growing in Turkey[8].

As regards the European Union, the High Representative for Foreign Affairs and Security Policy, Federica Mogherini, said the “Operation Olive Branch” is a cause for concern – even though the EU recognizes that Turkey needs to assure the security of its citizens living near the border –, especially for two reasons. First, because of the fact that some civilians were already killed and others were displaced. And second, the EU considers that the offensive can make a political solution for the Syrian crisis even harder to achieve, since it can affect the internal balances within the future Syria and on the region: therefore, all of the countries are asked by the EU to put all their efforts on supporting the Geneva negotiations, led by the United Nations. The head of European Diplomacy also said that all military action should be taken against UN-listed terrorist organizations – for instance, Daesh is part of that list, but neither the YPG nor the PKK is included. “Opening new fronts is no solution and I am afraid it will not make Turkey more secure. Real security can come only from a negotiated political solution to the conflict”, she added[9].

The members of the European Parliament are of the opinion that Turkey should end the state of emergency (which, in their point of view, is being used to repress the opposition) and, regarding Afrin operation, they direct their attention to the journalists, activists, doctors and ordinary citizens who have been arrested for their disagreement with Turkey’s military incursion[10].

The same tone was adopted by the two major political parties in the Bundestag, the German parliament. To the Christian Democratic Union of Germany (CDU, Angela Merkel’s party), what is happening in Afrin is against the international law and it is important to avoid any confrontation between the U.S. and Turkey. Norbert Röttgen, a member of the CDU party and chairman of the Bundestag’s foreign affairs committee, had already talked about the “Operation Olive Branch” as being “illegal, contrary to international law and counter-productive with regard to fighting ISIS”, adding that the Kurdish forces in Syria have not been attacking Turkey[11].The Social Democrats, for their part, consider that the Turkish offensive pushes further away the chances for achieving peace in Syria[12].

An immense uproar in Germany followed some reports claiming that Turkey was using German-made Leopard-2 tanks in Afrin, which lead the Foreign Minister, Sigmar Gabriel, to announce that the decision on Turkish request to upgrade their Leopard tanks had been frozen[13].

As for the other part of “the motor of European integration”, France, at first, the President Emmanuel Macron had warned Turkey not to use Afrin operation as an excuse to invade Syria – he went on to say Turkey should have coordinated it with its allies and that it is not possible to have enough security on the ground without respecting Syrian sovereignty by fighting against an enemy that is no longer Daesh[14]. Some hours later he told a news conference that, given the reaction of the Turkish Foreign Minister, Mevlüt Çavuşoğlu, to his words, he understood that Turkey’s goal is to protect the border and not “to go further than the positions which it occupies today or to stay in the region in the long-term”[15].

Yet, after almost one week, Jean-Yves Le Drian, Macron’s Minister of Europe and Foreign Affairs, had some harsh remarks for the Turkish offensive in Syria. He commented that it is a violation of the international law, underlining that “the security of its [Turkey’s] borders does not mean killing civilians and that should be condemned. In a dangerous situation in Syria, [Turkey] should not add war to war”[16].

Meanwhile, the United Kingdom’s Prime Minister, in its turn, has acknowledged the right of Turkey to protect its border and added that the UK will continue to help Turkey fight against the PKK. Even so, Theresa May underlined her belief that the political stability in Syria can only be achieved through political talks in Geneva, during the UN-led negotiations[17].

As far as the North Atlantic Treaty Organization is concerned, Jens Stoltenberg, the organization’s Secretary General, said that Turkey has the right to defend itself, remembering that “it is the NATO Ally which has suffered most from terrorist attacks over many years”, but called for it to be “done in a proportionate and measured way”[18]. On the other hand, United Nations High Commissioner for Human Rights, Zeid Ra’ad Al Hussein, is alarmed by the large number of people at risk, invoking some reports claiming that there are civilians (including children) “being killed and injured as a result of airstrikes and ground-based strikes”. Al Hussein also spoke about some inhabitants in the region who have been trying to escape but have been impeded from doing so by Kurdish groups[19].

In conclusion, there is a broad support for the military incursion in Afrin among the Turkish population (polling shows that more than 90% of people in Turkey are in favor of the “Operation Olive Branch”[20]) and political parties (taking into account the parties in the Grand National Assembly, just the HDP – Peoples’ Democratic Party doesn’t support it). However, as one can understand by reading the several opinions presented in this article, the same does not happen with the international community as a whole, where the difference of perspectives is clear: Even though it is almost consensual that Turkey has the right to secure its borders, the way the country is doing so is far from being unanimous.