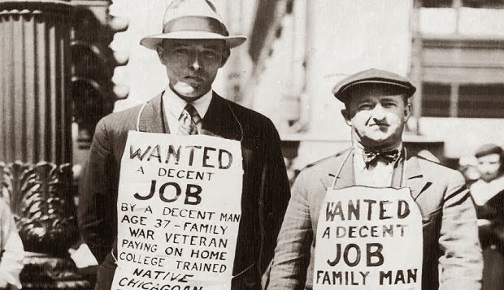 1929 World Economic Depression is the crisis which started in 1929 (effects of which weren’t entirely felt until the end of 1930) and lasted throughout the 1930s. Although the center of the crisis was North America and Europe, it brought about destructive effects in the rest of the world (especially in the highly industrialized countries).

The Great Depression stroke mostly the industrialized cities and caused an army of homeless and jobless people. In most of the countries effected by the depression, the construction business stopped, the 40% – 60% decrease in the cost of agricultural products caused bad results in rural areas. Mining industry was one of the most effected areas of the depression due to unexpected decrease in demand. The Great Depression ended at different dates in different countries.

Reasons of the Depression

As like many incidentens that affected the world, several researches and various comments have been made on this incident, too. Here is a list of some mutual reasons that generally take place in these researches.

First reason was the finacial powers of the american companies. While there were many companies in America in 1870s, small companies merged due to difficulties caused by I.World War and they monopolised after the war. In fact number of companies that have voice on 50% of American economy was about 200, which meant even bankrupt of one company would be enough tos hake the economy.

Second reason was badly built-up of banks. There wasn’t any law that specify capital principles, reserv and credit rates. For example, there was no law to provide reliability of financial charts. As a result, the investor could not access sufficient information about the company from which he took the promissorry note. Nor there was any law that descriminate trade banks from investment banks.

As a third reason, we can count inexperience of the Hoover Management in economy. According to supporters of this view, President Hoover governence chose no to interfere with economy, in the frame of the liberal economy that prevail in 1920s. However, social cost of nonintervention of 1929 depression was big. Later, when the president decided to interfere, it was too late and the intervention wasn’t successful. For example, it was claimed that his reducing the spending of the government to balance state budget and increasing in taxes caused unemployement, which caused decrease in buying powe of people and desrease in prices. Another indicator of the inexperience of the government was his insistence on relating on gold standard. The government carry out a strict money policy by refusing to issue money which didn’t relate to gold, as a result, when they couldn’t found money in the market, economical activities stopped and real sector diminished. This meant more unemployement and less income.

The last reason to be emphasized was that, as we stated in the beginning, America was net creditor in the world. Besides it demanded compensations that it wanted from Germany and England to be paid as gold. But gold reserves in the world was insufficient and present reserves were already under American control. So the payment of compensations and credits with goods and service was tried, but this stroke America’s own service sector. As a last solution, customs walls were carried out but this only resulted in decrease foreign trade. İn the end, America couldn’t take back the rashly given credits .

Click here for the other articles of the author