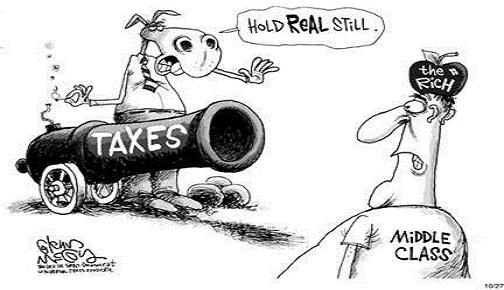 “How to finance social policies?” is one of the main questions when discussing social policy issues. Social policy means spending for a government and taxes are main financial resources for governments. By taxes, “burden of public spending is distributed to the society”.[2] Income based taxes are direct taxes collected from citizens yearly according to their income level. Consumption based taxes are indirect taxes collected from all who consume, regardless of their income. In other words when a worker and a CEO of a company buy bread, they pay the same amount of tax.

In the second section of this article, I will summarize a book written by a group of scholars, based on their researches and surveys results. This book shows us the problems of Turkish taxation system; reasons of the fact, the fact and results of the fact. In the third section, I will analyze taxation sections of manifestos of 4 political parties in the Turkish Grand National Assembly. I will summarize their tax policy and evaluate them in an egalitarian perspective (Egalitarian perspective briefly is arguing that income distribution in a society must be just if not be totally equal). In the last section, I will explain my opinion about this issue.

2-PROBLEMS OF TAXATION SYSTEM IN TURKEY

Here I want to summarize a research named “Vergi, Temsiliyet ve Demokrasi İlişkisi Üzerine Türkiye’de Vatandaşların Algıları”[3] which shows the problems of Turkish taxation system and how people perceive them. “Turkey is one of the countries in which percentage of outlay taxes in all taxes collected is the highest.”[4] In 2001 in Turkey, 51% of taxes were outlay, in 2010 the number became 65.[5] Unregistered economic activities make hard to collect direct taxes and to finance spending, government increase rate of consumption based taxes, and this leads even more unregistered economic activities. Indirect taxing is also against the basic principle of “justice” in taxing: the rich pays more than the poor. Furthermore it is getting harder to know who pays how much taxes via indirect taxing which is not “transparent”.[6]

According to this book, “democracy is the rule of citizens who pay taxes and by doing this, have the right to question those who are using the public authority.”[7] It is true that tax-paying citizens have stronger self-esteem to criticize the authorities. They see themselves “more citizen”. Survey results in this book show that people are aware of the problems of taxation system and have complaints about it.[8]

The book provides us a list of problems in Turkish taxation system: (1) frequently-changing tax legislation, (2) high tax rates on consumption and high rate of indirect taxes in all taxes, (3) unregistered economy which is result of very high tax rates, (4) distrust of citizens towards the state about taxes, (5) and frequent tax amnesties.[9]

Just by saying that rate of excise tax in taxes became 24.9% in 2008 while it was 1.4 in 2001[10], we can see the main problem of taxation system. Indirect taxes are paid by all citizens disregarding their income level. Since number of low income citizens is more than number of the high income citizens, tax burden is on shoulders of the poor in Turkey. In other words, Turkish government finances social policies towards poor population by taxes collected indirectly from the same group.

In Sweden, gini coefficient is 0.43 before taxes and transfers and 0.23 after taxes and transfers. If we say the number is 0.43 after taxation in Turkey, the problem becomes clearer.[11] Then how to solve this problem? Let see manifestos of parties which are now (2013) in Turkish Grand National Assembly, to see what their solution is or whether they accept the problem.

3-SOLUTIONS OF LEADING PARTIES IN TURKEY TO TAXATION PROBLEMS

The best way to understand a political party may be its manifesto. Parties state the problems of the country and their solutions to them in their manifestos. I think taxation system is a problematic issue in Turkey. Therefore, I want to analyze public finance sections of party programs of four political parties in Turkish Parliament; Justice and Development Party (JDP), Republican People’s Party (RPP), Nationalist Action Party (NAP) and Peace and Democracy Party (PDP).

a. Justice and Development Party[12]

“Vergi, toplumun ürettiği değerin bir kısmını devletle paylaşmasıdır.” is the first sentence of taxing section of JDP’s manifesto. Society share a part of what it gains with the state, this is the definition of tax according to JDP. What makes taxation important to the party, is only its great role in “sustainable economic growth”. This shows us that JDP is not interested in “redistribution” of resources. The party promise to; (1) simplify the tax legislation, decrease number and rate of taxes and make taxation “just”, (2) use taxes not only for financial purposes but also for social and economic ones, (3) take precautions to prevent taxation on gains from inflation, (4) tax unregistered economic activities by making documentation system working and enlarge tax domain, (5) undo unjust practices which depress low income citizens and protect artisans, craftsmen, workers, officers, pensioners and low income groups, (6) reorganize tax administration for efficient taxation, (7) give authority to local administration for some taxes.

This program, if done, can solve the problems of taxation system. Although the party does not see taxation as a redistribution of resources, solving those problems may create the opportunity for a more egalitarian society. This also shows that the problems are well read by the party.

RPP’s new taxation system seems more egalitarian and society-based. It promises to make taxes basis of “social justice, trust to state, fast growth and public service”. By a simple system, the rich will pay more and the poor less, according to the manifesto. It also says that by income based taxing policy, income distribution will be more just. The income which is at the level of minimum wage will be out of the taxation scope. Artisans and craftsmen will pay 5 point less income tax than the other tax-payers. The most important promise of the party is, I think, that rate of consumption based taxes will be decreased to the European average and the excise tax will be removed from many areas. The public will be informed regularly about collected taxes and spending. The forth promise of JDP is accepted. The tax administration will be autonomous, law-abiding, efficient and tax-payer-friendly. And finally tax amnesties will be ended.

The long taxation section shows that the RPP is aware of the taxation problems, and willing to make the Turkish society at the level of Northern European societies. The manifesto also explains how this aim will be realized. It mentions all problems, solutions and methods of solutions one by one.

The manifesto promises to make the taxation system just and efficient. The rich will pay more and the poor less. Unregistered economic activities, high percentage of indirect taxes in all taxes, complexity of tax legislation, organizational problems of tax administration and transparency problems are the problems mentioned and promised to be solved in the manifesto. The manifesto of NAP is, like of JDP, so general.

The manifesto sees taxation as a means to solve the income gap between citizens. Tax revenues rate in GDP is below the OECD states, indirect taxes are too high, and income taxes are mostly taken from waged workers. The party promise to use taxation as a tool to solve unjust income distribution in the society. The party also promises to make taxation system “efficient” and mentions some methods.

By looking at the manifesto of these four political parties, it can be said that the problems of Turkish taxation system is well known by politicians. So, they can discuss the issue and agree on solutions. Then, why they do not do this?

Social policies, in an egalitarian perspective, are tools to solve income gap and poverty problems in societies. The question of “How to finance social policies?” leads us to analyze taxation system, because taxes are the main resources of a government. As mentioned in the second section of this article Turkish taxation system has several problems and these problems lead other socio-economic problems. Taxation makes income gap and poverty problems more complex and harder, rather than being a tool to solve these problems. In the third section I tried to analyze taxation section of 4 political parties’ manifesto. It seems that the RPP is the only party which analytically approaches these problems and offers concrete and clear solutions. If I were to offer a solution, I would repeat the manifesto of this party.